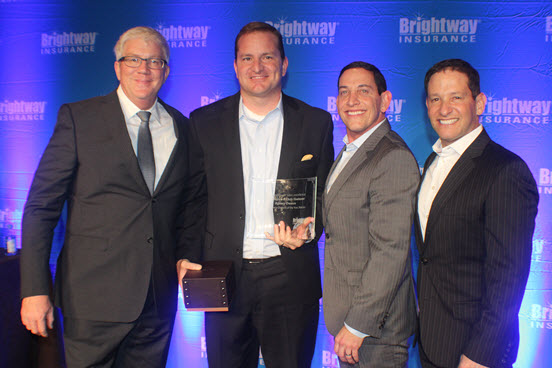 JACKSONVILLE, Fla.  — Brightway Insurance, one of the largest property/casualty agencies in the U.S., named Billy Wagner, Owner of Brightway, Ponte Vedra Beach and Brightway, Deland, as its 2017 Agency Owner of the Year (Units).  Wagner won the award for selling the most policies. Today, there are 152 Brightway stores across 19 states. Brightway’s leadership team presented the award to Wagner during the company’s annual Awards Celebration held Saturday, Jan. 20, at the Hilton Bonnet Creek in Orlando, Fla.

Wagner’s stores added 3,890 policies in 2017, driving annualized written premium to nearly $18 million by year-end. Wagner was one of the first people to open a Brightway store when he opened his store in Ponte Vedra Beach, Fla., in 2008. In 2015, he opened his office in Deland, Fla.

“We’re extremely proud of Billy Wagner and his team and look forward to this time each year when we recognize our top Agents like him,” said Brightway Co-Founder and Chairman, Michael Miller. “Brightway is a proven franchise system that provides an unparalleled, comprehensive system of support empowering store owners to outsell the competition three-to-one, grow their business and build an asset for their family.”

Chris Huebener, who has been with Brightway, Ponte Vedra Beach since the store opened, earned the top award a Producer can achieve, the 2017 $2 Million Producer Award, for selling nearly $2.9 million in written premium in 2017. This is the second year in a row he has earned the award.

In addition to awarding top Agents, Brightway named two Employees of the Year from its Corporate Office in Jacksonville. Lydia Register is a Customer Service Team Lead who has been with Brightway two years. Tracy Mulloy is an Accounting Commissions Manager who has been with Brightway four years. Both Employees of the Year have exhibited Brightway’s Core Values of Smart, Accountable and Trustworthy.

About Brightway Insurance
Brightway Insurance is a national property/casualty insurance retailer selling through a network of franchised independent stores throughout the country. With more than $500 million in annualized written premium, the company is one of the largest property and casualty agencies in the United States.

Brightway began franchising operations in 2008 and has since grown to more than 700 people in 19 states serving customers in all 50 states. Forbes has recognized the company as America’s No. 1 Franchise to Buy. Additionally, the company was named a top franchise three years in a row by Entrepreneur magazine and one of the fastest-growing private companies in America nine consecutive years by Inc. 5000. People wishing to learn more about franchise ownership with Brightway may visit BrightwayDifference.com and find us on LinkedIn. Consumers seeking a better insurance buying experience may visit Brightway.com and find us on Facebook.