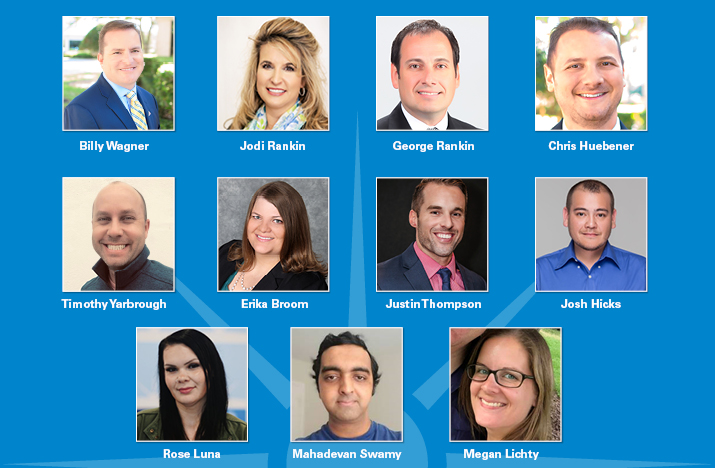 Billy Wagner, Owner of Brightway, Ponte Vedra Beach, won the 2020 Auto Sales award and the 2020 Flood Sales award, which go to the Agency Owner whose Agency sold the most Auto and Flood insurance policies, respectively. This is the fourth year in a row that Wagner has won the Flood Sales award.

Jodi and George Rankin, Co-Owners of Brightway, Regency, won the 2020 Commercial award, which goes to the Agency Owner whose agency sold the most Commercial policies. This is the third year in a row they’ve earned the award.

Chris Huebener, who has been with Wagner's agency since the store opened in 2008, is the only Agent in the company’s history to earn the $4 Million Producer award for selling more than $4 million in transacted property/casualty premium for the year. This is the eighth year in a row Huebener has earned recognition for exceeding $1 million for the year.

“I look forward to this time each year when we recognize our top Agency Owners, Agents and Home Office employees,” said Brightway President and CEO, Michael Miller. “Congratulations to Billy, Jodi, George, Chris, Justin, Timothy, Erika, Josh, Rose, Mahadevan and Megan on their achievements. We’re thrilled to see so many reaching their potential with Brightway.”

Backed by a team of more than 400 insurance professionals who support each aspect necessary to run a high-producing independent agency and armed with partnerships with the most insurance brands, Brightway Agents like Wagner, Huebener, Hicks, Broom, Yarbrough, Thompson and the Rankins are the insurance experts in their communities who offer the most choice.

About Brightway Insurance
Brightway Insurance is a national property/casualty insurance distribution company with more than $765 million in annualized written premium, making it one of the largest Personal Lines agencies in the U.S.

Brightway’s focus is on producing Win, Win, Win outcomes for consumers by offering customized insurance solutions and for people wishing to sell insurance by providing business opportunities that span from single Agent to multi-unit enterprises. Regardless of the path taken, Brightway provides the support necessary to consistently outsell other insurance agents.

Brightway got its start in 2008 and has since grown to more than 900 people in 293 offices across 22 states serving customers in all 50 states.